Brian J. Caldwell is Managing Director and Principal Consultant at Educational Transformations and Professor Emeritus at the University of Melbourne where he served as Dean of Education from 1998 to 2004. This paper was delivered as a response to a presentation by Jan Kronberg MLC, Chair of the Education and Training Committee, Parliament of Victoria that published a report of the Inquiry into the Extent, Benefits and Potential of Music Education in Victorian Schools. Her presentation and this response were part of a forum conducted by the School Music Advocacy Group conducted at the University of Melbourne on 5 December 2013.

This Music Forum could not have been timelier, coming less than two days after the release of the results of the 2012 PISA tests in 65 countries. Reading the headlines, to which I will return, one would imagine that a crisis is upon us, and that an even stronger regime of unrelenting high stakes testing and a further narrowing of the curriculum are required, and the arts in general and music in particular will be sidelined, and so the title of my remarks applies: ‘Will we resist the temptation’?

First, I must congratulate Jan Kronberg and her colleagues on the Education and Training Committee for their outstanding report of the Inquiry into the Extent, Benefits and Potential of Music Education in Victorian Schools (Education and Training Committee, Parliament of Victoria, 2013). It is one of the most comprehensive of its kind I have seen. Its review of research was comprehensive and its canvassing of the evidence, including the very large number of submissions is as balanced as one could have ever hoped to read. Its recommendations are sweeping and realistic and I endorse them all. As I shall demonstrate, they are relatively modest compared to what is needed.

What value can I add at this point? It is not appropriate that I refer to the evidence I gave to the Inquiry because that is privileging my status over others who are more expert than me as far as music education is concerned.  I would like to bring a broader policy perspective to today’s proceedings. After all, I have no background in music education. Even though I am an avid consumer of the arts, I have never played a musical instrument. I was a teacher of mathematics and science. However I did work with my colleague at Educational Transformations Dr Tanya Vaughan, now at the Australian Institute for Teaching and School Leadership (AITSL), to conduct the landmark research that led to our book Transforming Education through the Arts (Caldwell and Vaughan, 2012). Tanya is one of Australia’s finest impact researchers. I will refer to some of our research findings a little later. 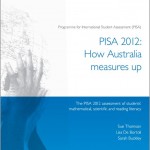 Leadership and Governance in the Self-Transforming School
Annual Report 2013