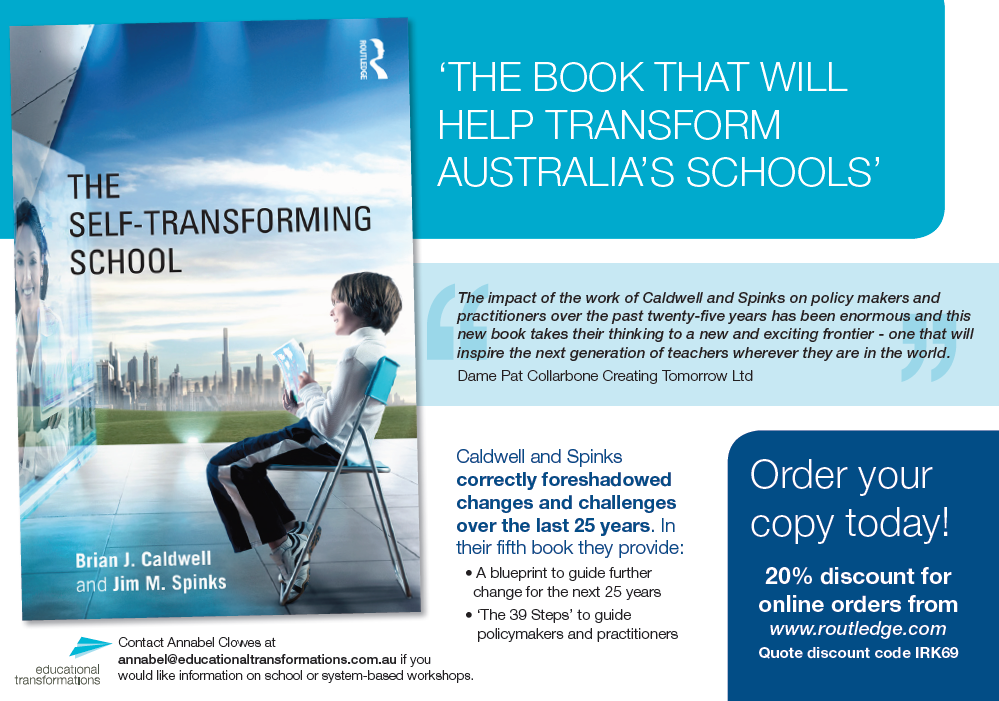 This is the first mega-analysis in education policy and practice. It combines an overview of insightful meta-analyses of factors contributing to the success of schools and an analysis of powerful mega-trends that are shaping developments in education in general and schools in particular.

The book spans 50 years starting with Caldwell and Spinks’ ground-breaking book The Self-Managing School (1988) that described approaches that were considered at the time to be either undesirable or impossible to achieve yet are now accepted as preferred practice. Twenty-five years later in their fifth book they draw on their work in more than 40 countries to offer a prognosis and plan for the next 25 years.

The central theme is that all schools in all settings can secure success for all students in an era where society and economy are changing constantly and dramatically. This does not mean that schools will operate alone; many if not most will be members of networks – many networks in some instances – and these networks will be global more than they are local. Most will be part of a system of schools and will draw on ‘the system’ for support in some matters. However, the school will ‘call the shots’. No amount of externally designed re-structuring, re-staffing, or command-and-control direction will by themselves be sufficient to achieve the transformation of schools. Many schools in some nations are doing this now, but achieving scale-up for all schools everywhere by replicating particular approaches cannot and should not be an expectation. Leadership of the highest quality deeply embedded in schools and systems of schools will be required. Leadership to reproduce the status quo or to achieve modest improvement will not suffice.

Three positive reviews of The Self-Transforming School by Brian Caldwell and Jim Spinks and published by Routledge in London and New York for an international market.

Professor Michael Gaffney is Convener of the Doctor of Education Program at the University of Canberra. He is Adjunct Professor and a former Foundation Chair of Educational Leadership at the Australian Catholic University, and a Professorial Fellow at Charles Darwin University.

School autonomy is a high priority in education policy these days. Brian Caldwell, arguably one of the world’s leading authorities on school autonomy, calls it a ‘megatrend.’

This book is the fifth in the series of books which began in 1988 with The Self-Managing School. It moves the concept of self-management forward within this book. The idea of self-managing has developed into that of self- transforming, whereby schools are transforming their own education system to ensure that the outcomes for all pupils are positive.